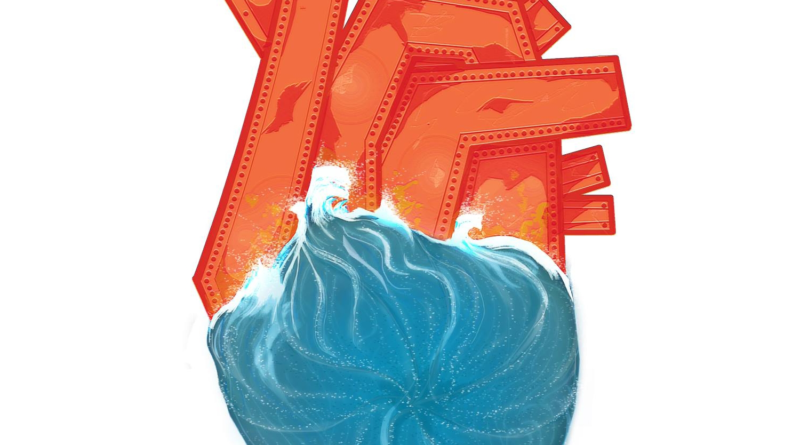 The Scottish a cappella ensemble, Perfect Forth, has put together a digital show that’s premiering at the Edinburgh Fringe Festival August 20th and 27th. Rachael sits down with this group of collegiate a cappella graduates with musical theatre values to talk about the inspiration for the show, how they managed to put it together during lock-down, and what’s coming up for the group.

Learn more about the show at https://tickets.edfringe.com/whats-on/perfect-forth-lost-and-found

Listen to the group’s music at https://www.youtube.com/channel/UC4CdlkcA037vSNyZ4njsXGw

Learn more about the group at https://www.facebook.com/PerfectForth

END_OF_DOCUMENT_TOKEN_TO_BE_REPLACED 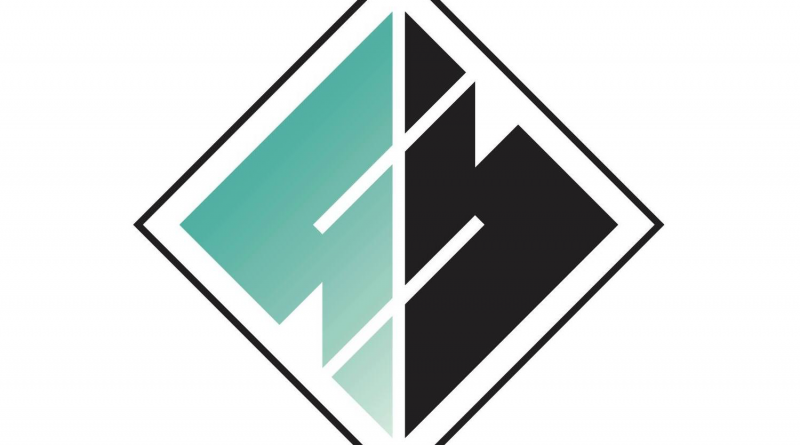 Fifth Street is a vocal quintet based in Victoria, BC. Its five members – Natasha Penfield, Jilaine Orton, Ryan Narciso, Kenji Lee and Taylor Caswell – met at the University of Victoria’s School of Music and formed the group out of a desire to make music together and continue growing as artists. Inspired by a capella powerhouses such as Pentatonix, The Real Group and M-Pact, Fifth Street combines the worlds of pop, jazz and R&B in five-part harmony.

Rachael sat down with three of the members to talk about some of their newest music, what the group has been doing during lockdown, and what’s coming up for the band over the summer!

Check out all the music featured in this episode on the group’s YouTube channel: https://www.youtube.com/channel/UCs8BFqzNAaxKK5LQJV8iBJQ.

END_OF_DOCUMENT_TOKEN_TO_BE_REPLACED 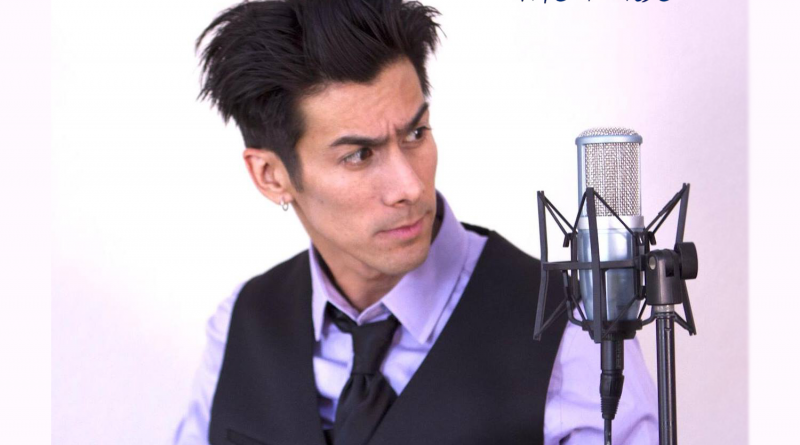 Paul Sperrazza has been performing as a singer since 1996. He has entertained worldwide audiences at Walt Disney World, Universal Studios, on Royal Caribbean Cruise Lines, Luxor, Las Vegas and Planet Hollywood, Las Vegas. But in the a cappella world, Paul is most known for cofounding and codirecting Vox Audio (formerly Toxic Audio), his time as a clinician, and his work developing Fearless Performing 101.

Rachael sits down with Paul to talk about his time with Vox Audio, the work he does know teaching kids to sing and perform, and what’s coming up for him!

Learn more about Paul at http://www.fearlessperforming101.com/

Listen to Paul’s music at https://www.youtube.com/user/spazzbox123/videos.

END_OF_DOCUMENT_TOKEN_TO_BE_REPLACED 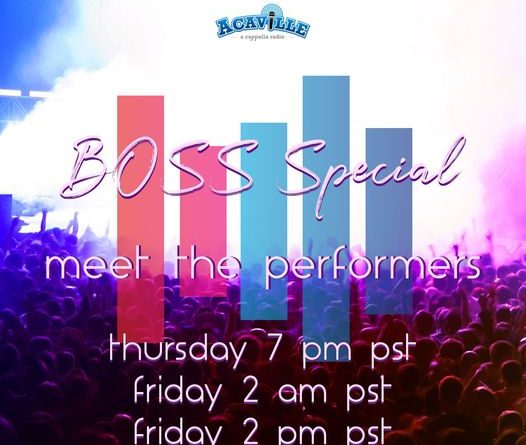 We recently sat down with competitors and performers from BOSS. Check out OneManJamz, live looper and deliberation performer, talking about his latest release, “Positions”.

Learn more about him here: https://www.facebook.com/OneManJamz

END_OF_DOCUMENT_TOKEN_TO_BE_REPLACED 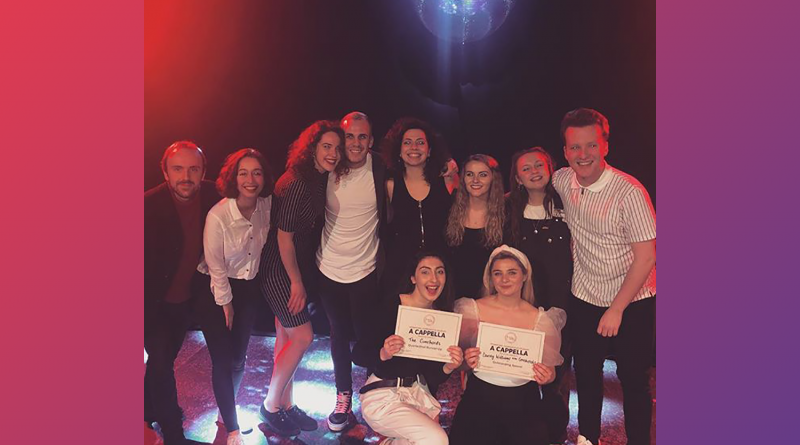 A little more than a year ago, the ConChords, originally from the Guildhall School of Music & Drama in the UK, were on top of the world, having secured a win of the UK ICCA semifinals and the right to compete on the stage at finals in New York. Then the pandemic hit and things came to a bit of a halt, but the group didn’t stop! They recorded and released their rendition of Moanin’, which was in their 2020 set. Rachael sits down with Johnny and Aitzi to talk about how that all went down, where the group is now, and what’s up next!

END_OF_DOCUMENT_TOKEN_TO_BE_REPLACED 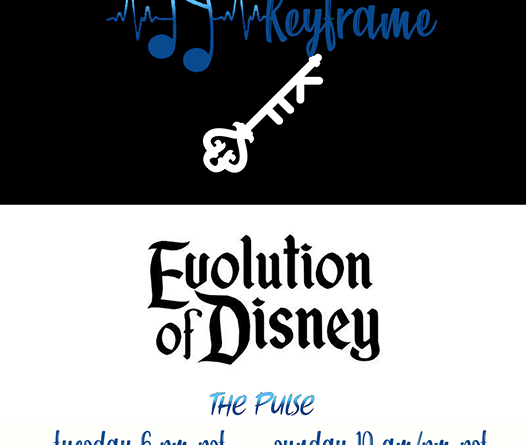 Keyframe Voices is the brainchild of Christopher Igoe & Graham Allen, two friends who wanted to view the magic of movies through the lens of a cappella. This prompted the duo to review the massive Disney catalogue and put together medleys of the various ages of the studio. In this episode, Rachael talks with Chris and Graham about their first two medleys – The Golden Age and The Silver Age – which feature gems from movies like Snow White, Fantasia, Peter Pan, Lady and the Tramp and so many more! They called on friends and singers from all over, the result of which is an amazing collaboration of talent that begs to be heard and seen!

You can watch and listen to the video for The Golden Age at https://www.youtube.com/watch?v=ARGpHyDdZ3Q.

You can watch and listen to the video for The Silver Age at https://www.youtube.com/watch?v=ID0_EToBSIM.

And while we didn’t discuss it in this episode, the video for the third installation, The Renaissance, was just released and can be seen at https://www.youtube.com/watch?v=92-rOJf4lsw.

END_OF_DOCUMENT_TOKEN_TO_BE_REPLACED 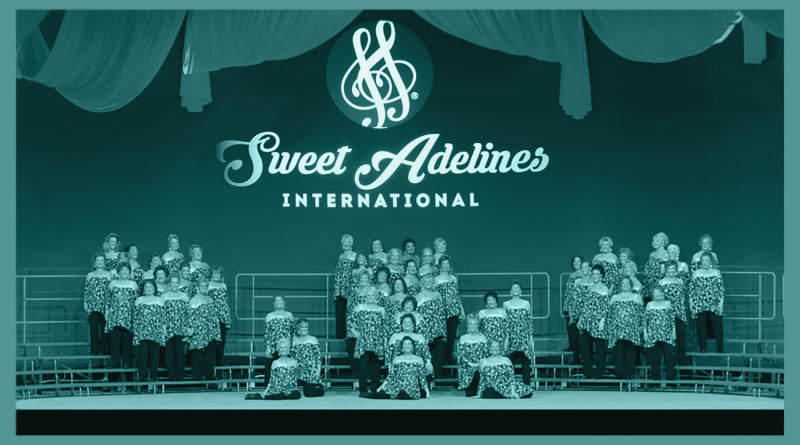 Even when daylight hours are short, Alaska Sound Celebration is long on fun, talent, and drive! This chapter of Sweet Adelines International is led by director Peggy Benton. The group has a strong commitment to education and competition, participating in Region 13, and has performed on the regular at the festival associated with the Iditarod since 1991! Rachael spoke with some of the executive board to learn about this fantastic and creative group of ladies and shares their spirit and personality with you in this joyful interview.

END_OF_DOCUMENT_TOKEN_TO_BE_REPLACED 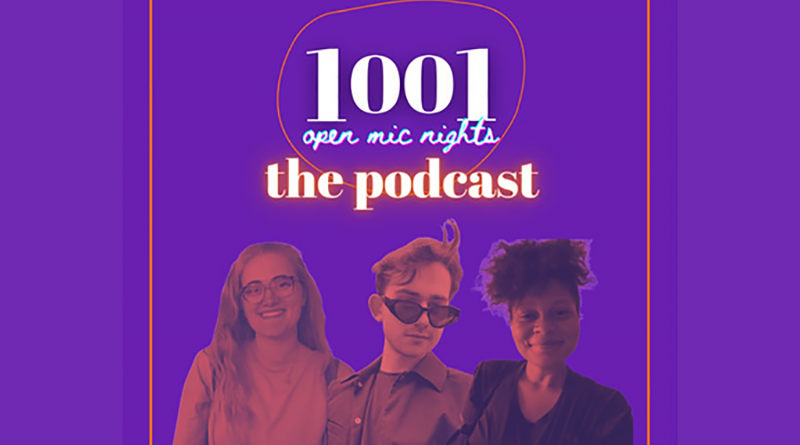 It’s podcastception here at The Pulse! Rachael sat down with George, Rob, and Charley from 1001 Open Mic Nights, a show being produced for Fringe this year, which is ALSO a podcast! We had a great time talking about how the show was conceived, what its current state is, and what plans are for the future, in addition to talking about the podcast. Plus, get a sneak peak at the podcast episode of 1001 Open Mic Nights that features Rachael!

Learn more about the show by listening to the podcast at https://open.spotify.com/show/24oYsAzZTxL4ITu32qdaa7

END_OF_DOCUMENT_TOKEN_TO_BE_REPLACED 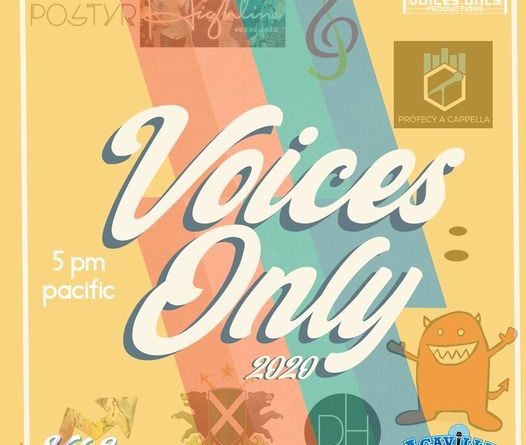 Highline is a vocal jazz quintet comprised of five friendly friends who really like singing. The group was founded in December 2017 and has been creating music videos for original, tight 5-part arrangements ever since. Based in NYC, they perform in the tri-state area and beyond, such as headlining N.E. Voices 2020, opening for DCappella on tour, and setting the stage for Kathie Lee Gifford at the 2019 Nashville Pops Holiday Show. We sit down with the group’s arranger, Jared Graveley, to talk about their rendition of the jazz standard, How High The Moon.

Listen to it at https://open.spotify.com/track/5edHUd37KiVPLm5bTfkU4S?si=xrfGFvk-Q8uVPkOO5JTpKQ.

Learn more about the group at https://www.highlinevocaljazz.com.

END_OF_DOCUMENT_TOKEN_TO_BE_REPLACED

Mark Silverberg, aka Docacappella, takes a page right out of musical satirist Weird Al Yankovich, with IT Guy, an original tune written, arranged, and sung by Silverberg and featuring Chris Harrison from ARORA. We sit down with Mark to talk about this tune’s selection for Voices Only 2020!

Listen to the song at https://open.spotify.com/track/16oG0mzUIE2skG7TxLiidW?si=gnsasUi9QmibNTR5WqWBkQ.